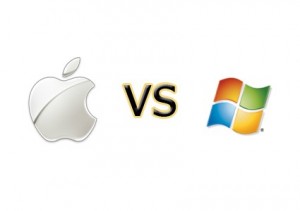 There has been always a war between Mac and Windows PC devotees and the MAC Versus PC debate will never end. PC which stands for Personal Computers generally refers to those computers which run on the Windows Operating system whereas on the other hand, Macintosh which is commonly known as Mac is a brand name that covers several lines of computers designed, developed and marketed by Apple Company. In this blog, we are comparing between Mac and Windows PC to help you get a clear vision to both of these brands.

MAC: The cost of Apple’s hardware is much higher compared to windows, there is justification for this expensive price. The top-tier support, higher quality hardware and its attractively designed features justify the heftier price. But MACs have certain hardware limitations such as no HDMI ports in laptops, no removable batteries and no Blu-ray drives. The starting price for Mac laptops are £850 and for desktop is £500.
PC: With Windows PC, you are provided with plenty of options in specifications, design and prices. You can find vast array of ports and accessories in the market. There are multiple options on your Windows hardware ranging from topnotch to poor. The starting price for Windows laptops are £250 and for desktop is £200.
If you are in need of desktop or laptop to perform basic functions such as web surfing (browsing) or word processing, then it would be more cost effective to go for Windows rather than a Mac.

MAC: When compared to PCs, MAC hasn’t captured larger share of computer market because it lacks software written for its operating system. Though it provides a better product, the shortage of specialized business software remains to be the main points of concern. The apps availability is not very flexible and huge as compared to PCs. Though for this point MAC users might make quality over quantity argument, but it’s a matter of personal opinion.
PC: There is no doubt that there are plenty (tons) of apps and software available for Windows PC. Diehard gamers are more gravitated towards PCs due to the wide selection of recreational software offered by Windows OS. Beside that it offers more options whenever it comes to bigger apps like music players, IM clients and many more.

MAC: MAC compared to PCs are not that flexible. You cannot upgrade whatever you like from a hardware point of view in MAC. From software point of view, you’ll find MAC drops compatibility with old applications far faster.
PC: Most Windows PC lets you upgrade to whatever you like because windows users have the benefit of everything being made specifically for them. It’s more flexible in regards that you can run everything from the latest games to the ancient DOS Payroll software. Pre-built PC with Windows can be bought from different vendors and you can even build your own from scratch as there are numbers of different parts available in the market.

MAC: It’s not true that MACs are free of viruses; however, far fewer viruses exist for it. Most MAC users are safe even without the use of any antivirus.

PC: Windows suffer various viruses. An antivirus is must and you should always stay on top of driver updates and security patches. Windows PCs are easily cut down with bloatware, clutter and memory munchers.
Hope this MAC Versus PC article added some value on your decision making point between MAC and PC. They have their own Pros and cons. Depending upon your need and specification, make a smart decision and enjoy the OS of your choice.

Planning to relocate your office? Here are some tips!